noun
a disease characterized by inflammation of the liver. 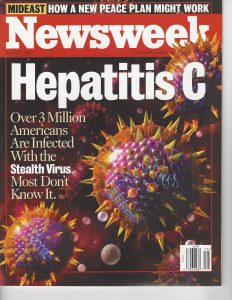 Hepatitis C virus (HCV) is not a new problem. The virus was identified in 1989, and the first interferon treatment was released in 1991, and direct-acting antivirals (DAAs) targeting HCV began in 2011. DAAs allow people to be cured of HCV with less side effects and less time that the first treatments. There is a cure. No one else needs to die.

Congress has refused to fund the elimination of the hepatitis C virus for deacdes. Congress has allocated only 10% of the needed money to eliminate hepatitis and save millions of Americans. Hepatitis will not wait, why is Congress?

Call Congress today and tell them to fund hepatitis elimination after years of inaction. 202-224-3121

Get Tested. Get Cured.

Browse through posts below